Clexa Con tried to be many things: a fan convention where people can watch entertainment based panels and interact with their faves, a film festival where projects by and for queer women are highlighted, an academic convention with workshops and networking. It tries (or more sceptically, it wants to look like it tries) to give a platform to the most marginalized of our community by offering panels led by QPOC, Trans and non-binary folks, people with disabilities and so on.  Also there’s an Artist Alley thrown in there because an event with the success of Clexa Con should definitely want to share some of that success with queer artists by propping them up, right?

In trying to be all of these things, Clexa Con 2019 seemed to fall short of getting any of them right. Clexa Con started in 2017 as a response to the harmful Bury Your Gays trope. It was meant to be a queer oasis where we could mourn the characters we’d lost, celebrate the ones who provided representation when it was needed most, and brainstorm a way forward. So why after the third iteration were many left with the impression that everything Clexa Con did was with one real goal in mind: to make a profit. There’s nothing inherently wrong with making money, this is a full time job for the people who run it, of course they should make money from all the work they put in.    Why are there so many people venting their frustration in the #clexapocalypse tag? A hashtag started by vendors as a way to shed light on how they were treated by the Con, but became a catch-all for people who felt Clexa Con didn’t deliver the product it advertised.
Why did one of the founders “step away” from her position a few months before the Con?

Why did a large portion of the core staff announce they were leaving their positions days after the Convention concluded? 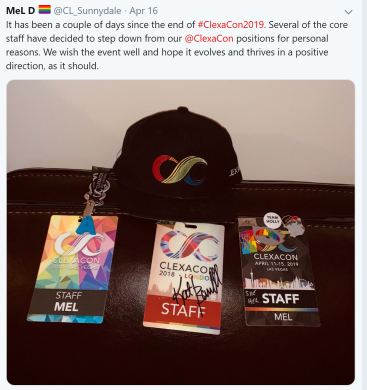 The most innocent conclusion is that they stumbled, that a still young convention bit off more than they could chew and a lot of innocent mistakes added up.

But the more I thought about the whole thing the less innocent it all seemed. After looking into the Visibility Fund, the charity that would benefit from Cocktails for Change this year, things felt less messy and more shady. By the time the Con was over, things felt messy and shady and frankly exploitative. That probably sounds like a harsh conclusion, but after taking everything in this post into account, is it accurate?

For me the first Red Flag this year came when Annie shared the response they had received from Clexa Con regarding accessibility for disabled Con goers. As a disabled person I found their original policy disgusting. As a someone who relies on proper accessibility to attend Cons I felt completely unwelcome. The policy stated that they would not be issuing stickers to ID people with accessibility needs (something that is common practice at most public events), used language like “we allow” wheelchairs, and their solution to people who are not able to stand for long periods of time was to BRING THEIR OWN CHAIR. There was an immediate response from people with disabilities and allies.

A day later they made an attempt to clarify their policy. They continued to use condescending language and suggested having “someone from your party” wait in line for you. I guess if you go to Cons alone like I do, you’re just screwed.

Their implication that disabled people were just trying to get special treatment did not go over well, here are some examples of how people were feeling after this clarification.

On February 11th they issued another statement saying that they were working to see where they could do better. I naively assumed there would be an apology and decent policy in a matter of days. Instead we waited weeks without any kind of acknowledgement of the people tweeting them with concerns and anxiety about if they would be able to attend the Con not knowing if their accessibility needs would be met. During the wait an oblivious tweet from Clexa Con’s account raised some eye-brows.

In the end it took them until March 4th to announce that they had updated their policy. I can’t speak for other people with disabilities, but even though the policy was a huge improvement, for me this was too little, too late. The language they had used did real harm, as did the amount of time they left us waiting for answers and they never seemed to truly understand that. The final policy still left much to be desired. It’s amazing how complicated they made something so simple just because they didn’t want disabled people to feel special.

By the time I was heading home from Vegas a new hashtag was in full swing: #clexapocalypse. Like I mentioned earlier, this tag was started in response to the treatment of vendors by the convention. I highly encourage you to read the two threads I linked below written by Clexa Con vendors, detailing much of what went wrong in the this year’s Artist Alley.
Open Letter from the Vendors     and     Official verdict on ClexaCon: Yikes.

These threads include emails between vendors and Clexa Con Staff showing that what was promised to the vendor is far from what was delivered as well as discrepancies in pricing and other issues.  They highlight errors in and a complete lack of communication, issues in how vendors were treated in what should have been a safe space, physical safety concerns, and lack of promotion on the website and visibility at the con.

No selfies and sub-par Photo-Ops

Prior to the convention an attendee posted this screen shot of an email they received from Clexa Con:

This is the second time important information had only come to light because someone shared an email on twitter, Clexa Con made no official announcement regarding selfies. The most obvious implication of this was that people would be forced to purchase photo-ops for significantly more money if they wanted a photo with a guest. Why this year were they suddenly so interested in selling more photo-ops? Hint: The people who own Clexa Con also own the company that was doing the photos this year. I’ll have a lot more to say on that further down.
I love selfies so I was pretty disappointed by this news. I buy plenty of Photo-Ops too, I just usually save those for groups. The email itself is annoying because of the wording “unfortunately guests will not be doing selfies” as if it were the guests’ decision (it wasn’t). To add to the confusion many guests were doing selfies at the Convention. Why were some allowed and some weren’t? Did they lie about it being a blanket policy just to boost photo-op sales?

Now to the photo-ops themselves. One attendee had this to say:

Another attendee talked to me about many issues they noticed with the overall impression: “The poor quality of the photo ops and their lack of flexibility in making it right, were totally unprofessional.” Once people started posting their photos the quality was so bad that other photographers were tweeting out offers to fix photos free of charge.

When all is said and done, this convention was about making money for three businesses and a “charity”. A convention that aims to “celebrate positive representation for LGBTQ women in the media”, a network that hosts and produces content for and by queer women, an event production company, and an organization “to promote positive representation of underrepresented communities in media”.

Here are some screen shots from the Nevada business registration:

The fact that all of these entities share the same ownership wasn’t hard to figure out, but I can’t help but wonder why none of this was ever shared publicly? Why wouldn’t it be announced that Clexa Con bought Tello. Tello is everywhere you look at Clexa Con, something that seems natural given the purpose of the Con and the business that Tello is in, but feels icky and self-serving now. The fact that they started their own “charity” to benefit from Cocktails for Change seems downright sinister.

I am not a POC, and I have no intention of speaking for a community I’m not part of, but for three years I’ve seen people share concerns over how POC are treated. I encourage to read this piece written by a WOC who was there: CLEXACON: WHY LGBTQIA+ WOMEN CAN’T CLAIM SAFE SPACES JUST YET

All weekend during the Con and in the days that followed there was lots of talk about certain guests being treated badly by the people in charge and even put in uncomfortable and unsafe situations. There are a lot of questions on this subject that we probably won’t get the answer to due to contracts and NDAs. However, the wife of one of the guests, Dot Marie Jones, did speak out and confirm a lot of what people were worried about.

Security, or lack there of.

Clexa Con cut a lot of corners to save money this year, one place this was especially obvious was at the entrances. There was no Security, volunteer or hired. There may have been a few bag checks and a volunteer sporadically checking badges, but for the most part  there was no accountability of who was entering the convention or what they had with them.

Clexa Con was a beautiful idea and for three years has given queer women and our allies a place to come together an celebrate our stories. Unfortunately, in the end it felt more like using celebrities as bait, intersectionality as a smoke screen, and an under-served community as an easy target.

I’m far from the only person who feels this way. Here are two wonderfully written threads by other attendees:
– Attendee @EGBridges thread : “It has turned into a profit-centered media industry con instead of a fan-run, fan-centric con, as it began.”
– Attendee @divinagpena thread: “everything seemed to be a money grab and greed had somehow contaminated what once seemed to be a celebration of diversity”

I should note that Clexa Con issued a statement following the criticism: Dear ClexaCon attendees and the larger LGBTQ+ community:
They mention the vendor floor, they say they are addressing issues around transphobia and members of the LGBTQ+ community not feeling welcomed, and they mention that they “re-worked” their accessibility policy.

I’ll be interested to see what steps are taken to improve on the issues they addressed, but I’m also concerned about several issues they didn’t mention.

Will they take an honest look at the ways they fell short? Will they put in the work required to do better? Will it be enough? Will people buy tickets to the already announced Clexa Con 2020?

I can’t answer any of that yet, but I do know that the queer community will soon have options when it comes to this type of event. There are a few groups who’ve already started planning similar events and seem committed to making everyone feel safe and welcome.

Update: ClexaCon addresses some of these issues on their website.  https://clexacon.com/about/team-blog/