BLUF: I’m raffling off several Wynonna Earp related items, all signed by one or more member of the cast and/or Emily Andras to raise money for The Trevor Project.

How: To be entered into the raffle you must donate $5 (USD) or more to The Trevor Project during the time period listed above. Further details about entering, including how to enter multiple times, can be found at the end of this post.

Why: Wynonna Earp and Earpers have done more for me than I can ever repay. This is meant to serve as both an example of and a “thank you” for the kindness of this community.
I don’t hide the fact that I have struggled with severe depression for most of my life. There were points when I was a teenager, still very much struggling with my sexuality in a religious community, that I strongly considered suicide.  I chose to support the Trevor Project based on their primary mission of preventing suicide among LGBTQ Youth.

What: There are SIX separate Lots (Prize Packs) that you can enter to win. The entry details at the end of this post will tell you how to enter to win the Lot or Lots of your choosing.  Here are photos of and details on the Lots. 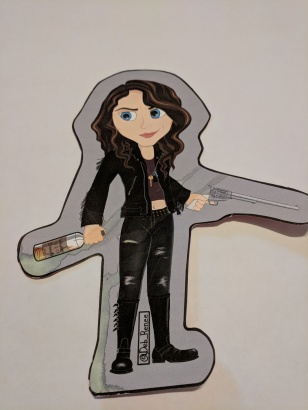 Details on how to enter:
1) Donate $5 or more to Trevor Project.
2) DM proof of donation to my twitter (@EarperMarine)

Entries may all be used on ONE LOT or spread throughout several Lots. Specify in your DM to me which Lot or Lots you wish to enter.

The raffle is open to everyone internationally, but I will ask that international winners reimburse me for shipping!

Good luck everyone and thank you for participating! If you have any questions or wish to see more detailed photos of any of the prizes, feel free to DM me on Twitter: @EarperMarine.