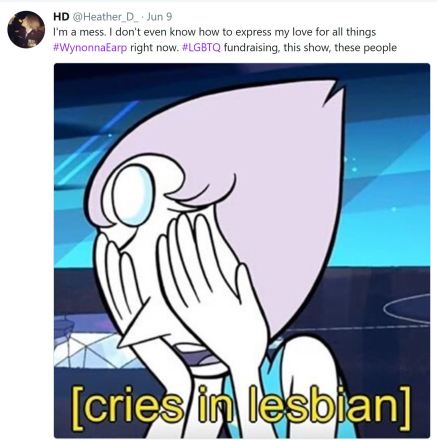 It’s safe to assume that if you’re reading this, you know that I’m a very big fan of the show Wynonna Earp. How big of a fan? Well a few months ago a visit to the set of Wynonna Earp was auctioned off for charity and out of an entire fandom known for it’s lack of chill I was the highest bidder and it was a lot of money and I was sober. I’ve up and flown to a different continent for an Earper Convention, and I’ll be attending a couple in North America this year. So here is a bit — I kept it as short as I could–  about why this show means so very much to me. 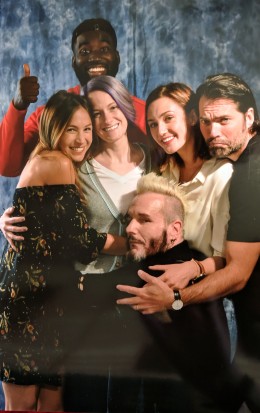 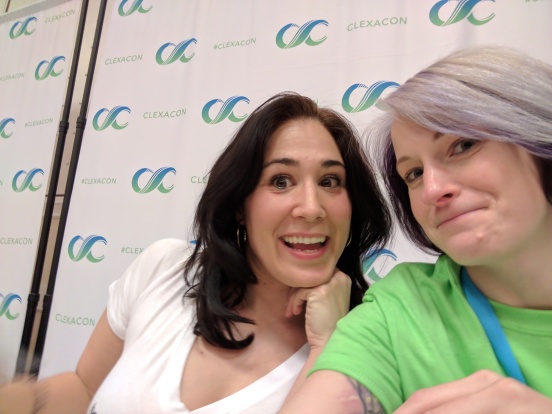 The Show
Listen, I pledged my loyalty to Emily Andras many years ago when she was running the best show about a Succubus that there ever was. Her being in charge was reason enough for me to tune into a new Syfy show. I knew I would like it, I knew I enjoyed Emily’s sense of humor, I expected Emily to give me a relatable and badass female lead, and I trusted that she would include good queer representation. I knew I would like Wynonna Earp, but I couldn’t have expected just how much of an impact it would actually have on me.
First of all, Emily and her writing team fucking delivered. I am in no way a tv critic – my television preferences are not the least bit sophisticated or refined. I just want a show to make me feel all the feels and to have quotable one-liners and Wynonna Earp excels in both categories. Season 2 of Wynonna Earp is easily my favorite season of television ever. Andras and crew raised the bar in every way possible. Every episode was fun, badass, heartbreaking, and heartwarming. EVERY SINGLE EPISODE. It was a feminist, gay, inspiring roller coaster of emotion and I loved every second of losing my shit each week. I could go on and on (and on and on, just ask everyone who has had a conversation with me in the last 18 months) about how good of show Wynonna Earp is and how great it is to have an interesting, flawed, funny, kickass lead woman, but many many actual tv writers have already done that much better than I could. I’m just going to talk about my relationship to the show and what it, the cast and crew, and the fandom have meant to me.
The biggest thing – arguably as important as the writing – that makes this show work so well is the casting. Not only is each person perfectly suited for their role – especially Tim Rozon as the legendary Doc – each actor is just such a wonderful fucking person. As a fan of the show it feels like we struck gold with every single one of them, both as their characters and as humans. This blog would be too long for anyone to read if I went into all the reasons I love each of the cast members, so I’ll leave that for Twitter.

Wayhaught
Representation in general has come a long way since I started watching tv, but there is still a long way to go in every area. Getting a smart, witty, feminist hero show still feels like a huge deal, add positive wlw representation to that and it’s like hitting the jackpot. Lost Girl, Super Girl (although the dropping of the “feminist” ball in season 2 is enough for a separate blog), and Wynonna Earp are the only shows that come to mind that have truly made a mark on me by having a kick-ass female hero and a well written wlw storyline front and center. I’ve known Emily long enough that I went into this show 100% trusting that there would be good queer characters. I was pleased, but not surprised when she—without even knowing it at the time – gave a huge middle finger the the “Bury Your Gays” trope and embodied an actual meme by putting Nicole Haught in bullet proof vest. I fell in love with Wayhaught in Season 1 and continued to feel respected by the representation in Season 2 watching the the pair fall more in love while also overcoming obstacles.
I love both of these characters. Two smart, capable, interesting women who happen to be crazy about each other. I don’t think the couple would be nearly as endearing, however, if they weren’t portrayed by two of the most lovely humans on the planet. From the beginning Dominique “Deca-Threat” Provost-Chalkley and Katherine “Officer Dimples” Barrell have engaged the fans of the ship and shown that they truly value us. Beyond being gorgeous and talented, they’re wonderful, kind people. They’ve both said how seriously they take the responsibility of portraying a queer relationship and it shows – they have both been fantastic allies and I’m very grateful to have them in our corner.

Earpers from all over the world!

Earpers
Of course, the best for last, Earpers. Without a doubt the most special thing about this show is its fandom. In all my years of being a tv fan on the internet I’ve never seen anything like the Earper community. Over the course of 2017 Earpers changed, and possibly saved, my life. I’m very open about the things I struggle with and there haven’t been many points in my life where I struggled more than I did during the Spring in 2017. I hadn’t been very involved with the fandom in Season 1, I never did a live tweet and only really talked to handful of Earpers – most of whom I’d met at ClexaCon. Luckily a few Earpers are worth a few hundred non-Earpers. In the months prior to Season 2 premiering I was suffering a pretty serious emotional breakdown and my tweets made that clear. The support I received didn’t come from followers I had had for years or from people who knew me outside of twitter, it came from a few Earpers.
Then Season 2 started. For a couple of months leading up to this day I only had one emotion, one feeling and don’t really know what to call it other than “broken”, my depression had eclipsed every other emotion. Over the course of June 9th I think I felt every human emotion. The day started with seeing an Earper campaign to raise money for the LGBTQ community and right off the bat I was flooded with gratitude and love. That night I participated in the live tweet for the first time and afterward the Whiskey and Donuts hangout. Between the outstanding premiere and seeing other people love this show as much as I love it, I was overwhelmed. It was far from the last time this community would have me crying tears of joy and gratitude. Talk about being “all in”, I had to create a separate twitter account devoted to just Wynonna Earp and Earpers.
Earpers have continued to support me and inspire me with their kindness. As I continue to search for my “purpose”, I know that Earpers are going to be a big part of helping me. For now, I live for the moments when someone reaches out to tell me that my words helped them in any way. My gratitude for anyone reading this is beyond what I can put into words, instead I’m planning to put my gratitude into action. I’ll be planning a few projects throughout the year to try to give back some the kindness I’ve been shown.

Big love to you all.

4 thoughts on “Wynonna Earp and The Power a tv show and its fandom can have.”