There is A LOT going on in this show and it’s very easy to miss something that could be important. Since I have little else to do besides rewatch and think about Wynonna Earp, I thought I would offer up this kind of “cheat sheet”. It’s broken down into two main sections, first a look at the specific episode, the second part is kind of a deep dive into mysteries and clues surrounding all the main characters and entities.

Disclaimer: Nothing included in this post should be taken as absolute fact. Even information that I took directly from the show is stated as I see it and is in no way endorsed by anyone officially linked to the show.

*Fun fact, I’ve known since February that there was going to be a Christmas episode and that Waverly was going to get dressed up and sing for Nicole and I can’t believe the day finally came.

It’s Christmas in Purgatory and our team is festive AF. Mama wants to give her girls the Christmas they’ve all missed out on for so many years. Unfortunately, this is still Purgatory and bad shit is going to happen no matter whose birthday it is, so there’s some rescuing that needs to happen before everyone can enjoy their dinner.

Bulshart has been holding a grudge for over a century against all the families that lived in Purgatory and “allowed” him to be entombed by Wyatt Earp. Since his plan to have the Vampires deliver the original families to him failed, he starts taking matters into his own hands…his own trees. He’s collecting them in what looks like a slightly less scary dentist’s office than I’m used to and turning them into more creepy trees I guess.
There’s a newer new guy hanging around, and honestly I already have so many questions, comments, and concerns about Charlie Fire-Services that I had to add him to my cast-of-characters down below.  Anyway, Charlie is eager to be on Team Wynonna and helps her rescue the folks Bulshar has been kidnapping.
Among the rescued group is Robin, who totally didn’t ghost Jeremy. Robin’s fate is still up in the air though because he appears to have already ingested the evil green smoothie.
Wynonna tells Waverly what Bobo told her about Waverly’s father and Waverly demands answers from Mama, who I have to mention doesn’t confirm nor deny that Julian was/is an angel. What we do learn from Mama is that Bobo was there in the Greenhouse the night Waverly was born. Bobo’s version of events paints him as Waverly’s savior, who after learning that the baby Michelle had just given birth to was his Waverly, his angel, took the newborn to Ward demanding that Ward care for the child or Bobo would kill him. Check further down for more about what we’ve learned about Michelle/Julian/Bobo/Waverly.
Doc isn’t feeling the love from Wynonna and like, can you blame her for not wanting to put herself out there? I mean, dude, she just found out that your wife is in town. Anyway, Doc needs to be needed and even if Wynonna did need him, she would never tell him that. And since he has the emotional maturity of a turnip he chooses the quickest way to have his needs met and goes back to Kate after some pouting at the Christmas dinner table. Kate tells him what he wants to hear most, then she offers a solution to his other problem and consequences be damned, becoming a vampire is the quickest way to rid himself of his pesky mortality so he tells her to turn him.
Wayhaught? They’re pretty much just doing it a lot this episode. They’re doing it loudly and they’re doing it in festive costumes and I can’t stop thinking of dirty comments stemming from the phrase “Christmas came early this year”.
One last thing, our poor sweet grumpus Sheriff Nedley is fucking spent and tells Nicole that he’s retiring, his intention clearly being that she will succeed him as Sheriff. Waverly is super proud of her little elf and already started referring to her as “Sheriff Nicole Haught” because it’s Christmas and no one has time to explain that that isn’t how becoming Sheriff works.

Gems You May Have Missed:

Bonus: This exchange between Mel and Kat was the fucking highlight of the episode for me. 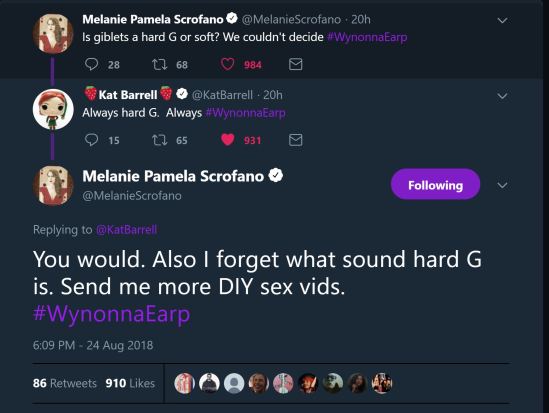 Answers to questions you may have:

Questions that I don’t know the answer to and it bothers me:

It’s not fair that you’re always elf-cast.
Well, that’s not canon.
I guess the menstruangel can go back in my box.
Oh!
I’m vegan. – You’re already a lesbian.
I passed the Bechdel test with flying colors. A whole rainbow of them.
Uh, huge dick…He IS a huge dick. I don’t know about his size…down there. – He’s probably an innie.
I wasn’t ghosted, my date was just kidnapped by Bulshar, maybe! Huzzah.
Merry Christmas ya filthy animals.
Who you talking to? – I’m not sure.
Premature e-joke-ulation

My attempt at the timeline:

Main players: What we know about what we don’t know

Most of this will be things that were shown or stated in the show, however I am including theories that I feel strongly about, those theories with be in italics. Anything that was added since the last post will be in bold.

Wynonna Earp:
– Most of the mystery surrounding Wynonna has to do with the years she was away from Purgatory and doesn’t seem like it’s going to have much of an implication on the show (I’ve heard it’s explored more in the comics).

John Henry Doc Holliday:
Like Dolls, there are plenty of questions, but I’m not going to dig TOO deep unless I think it’s going to have an impact on the show in the near (this season) future

Kate aka Katalin aka Countessa:

If you hated this, keep that to yourself, I’m sensitive. If you enjoyed it and would like me to continue, please let me know by liking, commenting, and sharing it on twitter.